Earlier today I was talking to a colleague about the state of the music industry and how it’s so hard nowadays, for somebody with a discerning ear, to find exciting music on the radio.

Well, one can say that once you’re a muso, your perception of the entity “song ” is so much deeper than the average listener’s, and that you don’t get excitement by something that’s format you learned (or you delude yourself you actually learned) to master. There is a very good argument to be made there, and I’ll be dealing with in a different installment,  however now I’d like to share with you some of my ruminations regarding the very act of producing pop music.

One can say that the quality of “pop” means the object of your creation is actually enjoyable by a large segment of the average public.

If you are a researching musician, you will in time grow tired of easy solutions, and listening to, and in turn, composing commercial music will become less and less satisfying. And it’s a very human and understandable condition, very much similar to what happens when you get into something and develop a superior taste. If you are a discerning reader, chances are that any cheap paperback won’t do. If you’re a wine enthusiast, finding the perfect bottle for your meal is suddenly a priority.

The results of such an emancipation often lead to music compositions that are forward thinking and have, at least in the head of their composer, a sense and a scope, but are often cause of alienation for the listeners, depending on their degrees of culture, open mindedness, and emotional closeness to the artist.

The implied flipside of that reasoning is that to compose something accessible and digestible, you have to stick what some kind of musical common sense accepts as enjoyable.

In other words, you have to stick to some basic concepts if you want to compose pop tunes. Form is one, the Intro / Verse / Chorus / Verse / Chorus / Middle 8 / Chorus / Outro is now perceived as the most effective. Also (and some of you might be surprised by this, while some others might not agree) there are only a handful of chord progressions you can employ effectively to write a song that works (with some notable exceptions, being “Strawberry Fields Forever” a sterling one). It’s a very common tendency now to produce four chord tunes, and keep them well firm into tonality. Listen to Bruno Mars, The Black Eyed Peas, Kathy Perry and the such for an example of that. And don’t get me wrong, those songs work, especially because of those awesomely crafted solid gold melodies.

If we got to start making assumptions about what makes a pop song work we can say that such a composition employs:

These are very restricting rules – no wonder people say “Today’s pop music sounds all the same”.

But here’s my observation: If you listen to radio music in the ’60s or the ’70s (an era  regarded by many as a golden age), the vast majority those compositions show the same four traits. Pop music compositions is a craftman’s skill more than an artist’s expression and those guys and producers knew it. One of the silliest, less intelligent, borderline cringeworthy songs I can think of off the top of my mind is The Beatles’ “Hello Goodbye”. Repetitive structure, unimaginative chords, low IQ lyrics. Still I regard it highly as a clever composition and it’s part of my all time fav record, “Magical Mystery Tour”.

So, how come I could never accept, I don’t know, Beyonce’s ”If I Were a Boy” in the same league? And it’s got nothing to do with acknowledging the pioneering spirit of Sir George Martin (nobody did it before!) or being the whitest boy alive and not “getting Hip – Hop, man?”

I guess the bigger question is: how can you make 3 minutes of disposable organized soundwaves into something more enjoyable for the less casual listeners? Where’s all that texture, depth and innovation? How come I keep on hearing the same two Nord Lead and Access Virus patches over and over now?

Well I gave it a thought and this is what I came up with:

Back in the ’60s, you are a singer songwriter. You have command of the basics of songwriting and have talent. You know your guitar or piano, those are the tools you use to express yourself. One day you go to a recording studio and you see a Fender Rhodes, or a Mellotron, or a set of Tubular Bells.BAM you have a love story with the thing. You experience the physicality of the object, you bask in the soundwaves coming out of the thing. all of a sudden you get inspired and some door opens up in your head; you have a new color to add to your palette. And it’s so rare you can access such a sound, or some other thing, like a flanger device or an echo chamber that you almost intellectualize the thing and find 101 different ways to interact with it.

And so you have texture and new ideas.

And so you have the Brian Wilsons, the Ray Charleses the John Lennons, the Stevie Wonders, the Paul Simons.

Now everything you’ll ever want is in your workstations. Samples, loops, effects; it’s really a great thing. One click of the mouse and you can reach the whole human knowledge in instruments.

But that doesn’t even remotely compare to standing next to a symphonic marimba and contemplating such a force of Music. Or romancing a ride cymbal or a snare drum and milking all the possible sounds out of them. Putting your head in the chamber of a grand piano, experiencing the different ways to attack, pluck or bow a cello. Revere a Mini Moog, respect a Rhodes, enslave an Hammond Organ.

So many instruments, so many characters and personalities. And we all live them through a plastic MIDI controller and they’re all cheap prostitutes.

I guess what we can do to make our compositions bigger, larger, more interesting, even if it’s just a silly pop song is to go out and experience the physicality of the sounds we’re going to use. Go to a church an listen to the Pipe Organ and see what happens to your own body there. Hell, just listen to the ambience!

Listen to a piano sonata and stop caring about the notes, but hear the harmonic implications of the strings phasing and antiphasing. How many of us can use, say, a Vibraphone patch in a song and recall vividly what it means to stand next to the real thing, feeling the air around it, perceiving the tremolo motor spinning and the choice of the mallet’s hardness to coax this or that sound.

And then, of course, knock yourself out with that 3 Osc Hard Saw patch in your keyboard. It’s the new electric guitar and it’s the bread and butter of modern pop. But also in that case, contemplate it for what it is. See the heritage of  ’80s synth pop it carries with itself.

Research. Understand. Music is so much more than the sum of its parts and what you put into it contributes to the perceived overall feel of the composition.

Probably we just all became very lazy, maybe spoiled for choice? All those sounds and nothing to fall in love with. 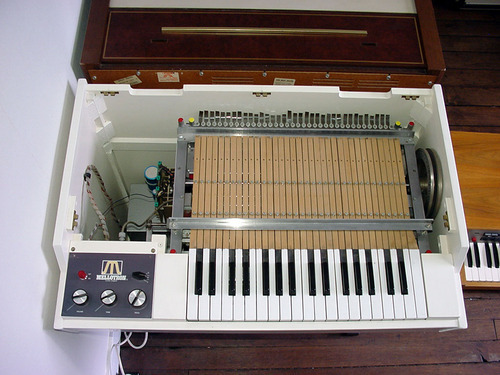